Point and Figure is a charting technique used in technical analysis, used to attempt to predict financial market prices. This kind of  charting is unique in that it does not plot price against time as almost all other techniques do. Instead like Range Bars, Point & Figure Charts do not consider TIME only PRICE. It plots price against changes in direction by plotting a column of Xs as the price rises and a column of Os as the price falls. 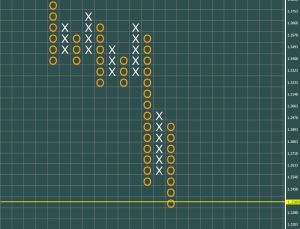 Trend lines
Point & Figure trend lines do not follow the exact same conventions as trend lines for bar charts, and are much less subjective. First, they do not necessarily have to connect previous tops or bottoms. Second, the way they are constructed will always result in them being charted at 45 degree angles (or -45/135 degrees if decreasing). Trend lines are very important in point & figure analysis. 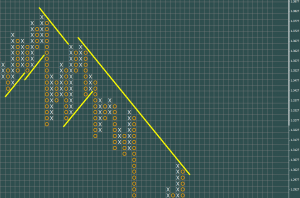 The most common Point & Figure patterns are shown at following image with noticed buy/sell signals.

*Keep in mind, that patterns are only one of several things we look at when evaluating any equity. When analyzing the P&F charts to determine the moment to to buy or sell shares, the following criteria must be evaluated: Patterns,Trend Lines,Price Objectives, Market Indicators

Price Targets
There are several methods for determining the price objective on a Point & Figure chart, the most popular is the vertical and horizontal count methods. The vertical method measures the length of the thrust off a high or low and projects the thrust to obtain a target. The horizontal method measures the width of a congestion pattern and uses that to obtain a target.

History
The Point & Figure technique is over 100 years old. “Hoyle” was the first to write about it and showed charts in his 1898 book, The Game in Wall Street. Richard Wyckoff also described the technique with charts in his 1910 classic, Studies in Tape Reading. The first book/manual dedicated to Point and Figure was written by Victor Devilliers in 1933. Chartcraft Inc, in the USA, popularized the system in the 1940’s. Cohen founded Chartcraft and wrote on point and figure charting in 1947. Chartcraft published further pioneering books on P&F charting, namely those by Burke, Aby and Zieg. Chartcraft Inc is still running today, providing daily point and figure services for the US market under the name of Investors Intelligence. Veteran Mike Burke still works for Chartcraft, having started back in 1962 under the guidance of Cohen. Burke went on to train other point and figure gurus, such as Dorsey.
Du Plessis describes their development from a price recording system to a charting method. Traders kept track of prices by writing them down in columns. They noticed patterns in their price record and started referring to them first as fluctuation charts and then as figure charts. They started using Xs instead of numbers and these charts became known as point charts. Traders used both point charts and figure charts together and referred to them as their point and figure charts, which is where Du Plessis suggests the name point and figure came from. Modern point and figure charts are drawn with Xs and Os where columns of Xs are rising prices and columns of Os are falling prices, although many tradionalists such as David Fuller and Louise Yamada still use the Xs only point method of plotting.