From the beginning of my friendship with Forex and Stocks – until this blog was born – I’ve tested a lot of strategies based on: MA’s(moving avarage), Bollinger Bands, Fractals, Stochastics, MACD, Parabolic SAR, CCI, Zig-Zag, Channel(figure) trading, support, resistance and much, much more.

After hundreds of unlucky tries to find 100% profitable method(also called “holy grail”) in forex(stocks) – i concluded that there is no “holy grail”.(by the way“ from the beginning, my brother LS had pessimistic view about “holy grail” and was talking me about that thousands of times)
The main method which looked explainable and sometimes profitable for me was – support/resistance trading. In spite of it  i wanted more accurate signal for “jump in” or closing the trade. Because of my trading style – 1h/4h charts – i was used to spent a lot of time opposite my PC monitor to understand whats going on the “stage”. Also that support/resistance lines at short period trading were so unclear and unstable… that was killing me.

After a while – my sufferings were spotted – I discovered Point & Figure charting method. This kind of charting gave me clear(filtered) support/resistance image. Later i discovered the world of Point & Figure patterns, what gave me an opportunity  to find accurate  buy and sell signals.

At the beginning i used classic Point & Figure drawing method – based on  pencil & paper. Later, internet gave me special  PnF  MS EXCEL sheets. MS EXCEL was not bad, anyway the disadvantages were:  importing/exporting  market data and poor graphical side of charting. 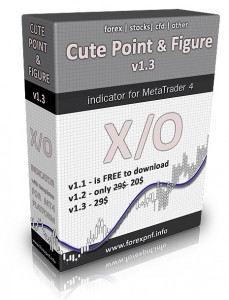 Print screens of indicator are at photo section.